USA Swimming confirmed on Monday plans for the 2021 Speedo Summer Championships. The meet will take place from August 3-7 and be split into East and West sites.

The meet is being referred to specifically as “Summer Championships” and not “National Championships” because the results won’t be officially combined into a single ranking.

This replaces the slot that typically houses a post-Olympic Games Summer National Championship meet. Historically, the U.S. Olympians have only rarely competed in that event, and with swimming concluding on August 1 (Tokyo time) and a long trip back, that’s likely to be true again. Though, with new restrictions encouraging athletes to leave after their competition is concluded, there’s a chance some will arrive in time for late-meet races with an eye on securing National Team qualification or qualification for other meets.

The USA Swimming Summer Championships will include the full 34-event Olympic schedule (but no stroke 50s) along with 400 free, 800 free, and 400 medley relays. There will be no mixed relays, in spite of that now being an Olympic event.

The 800 and 1500 freestyle races will be swum as timed finals, as will the relays.

Swimmers will be sent to a specific meet based on geography. Wisconsin, Illinois, Missouri, Arkansas, Louisiana, and all states to their west will travel to the West meet, while Michigan, Indiana, Kentucky, Tennessee, and Mississippi form the boundary of the East meet.

USA Swimming will employ a time standards system that other countries have used but that is fairly novel for major American events. The Summer Championships will have separate time standards for 19 & over swimmers and 18 & under swimmers. This system allows the meets to include the top-performing juniors who might factor into future national or international conversations gain the experience offered by these high level meets, but can limit opportunities for college-aged swimmers.

This system repaints a meet like this as more of a “pathway” to the end goal, which is international success, rather than a true domestic championship. The system also reframes the incentive-perspective of qualification for national meets like this.

There will be Bonus Standards for both 19 & Over and 18 & Under age groups, with the regular 18 & Under standard being the same as the 19 & Over standard. Athletes who have qualified in one or more individual events can swim up to two bonus events in events where they have achieved the Bonus Standard.

There are specific relay qualification standards as well. 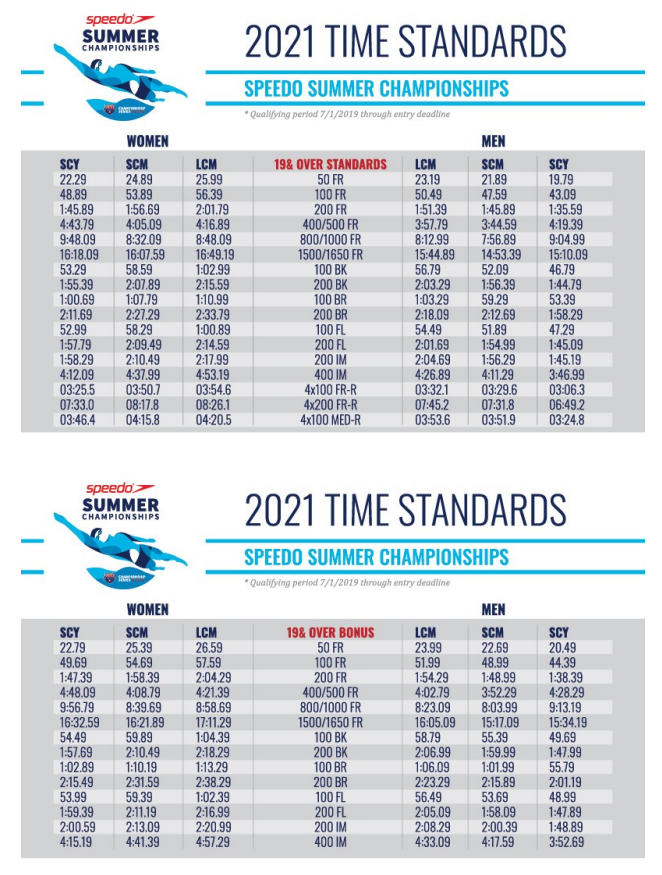 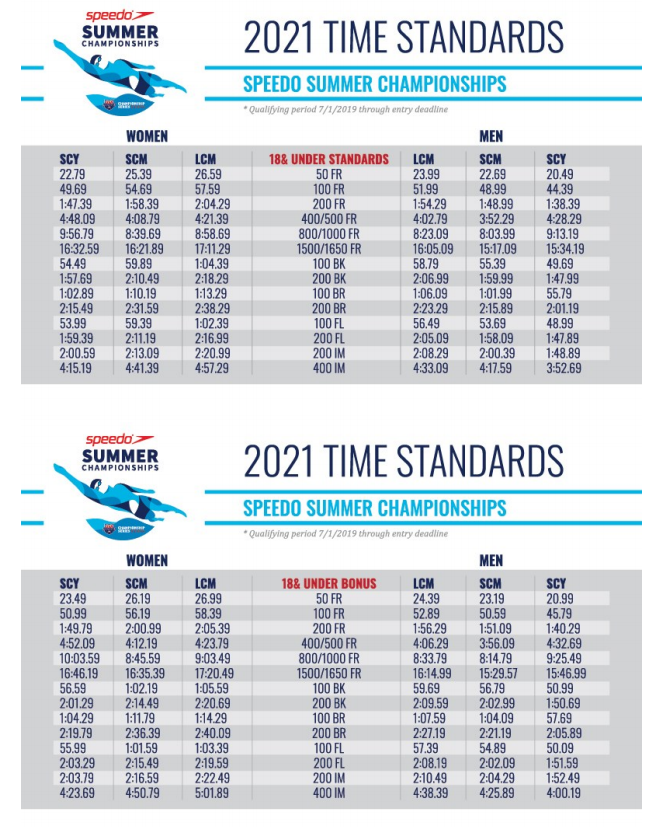